VAW as an FoE Issue

Through the course of this year, I've had a number of conversations about VAW and FoE. About being anti-VAW but pro-FoE, and about how the two might interact. ...The conversations have resulted in my becoming increasingly convinced that the two simply do not compete, although to reach that conclusion, I’ve had to define my understanding of VAW in what could be considered to be narrow terms:


VAW includes any form of violence against one or more specific women; it does not include abuse against the idea of women. In other words, VAW includes targeted abuse but not, for example, non-targeted misogynist rants.

The reason I’ve had to separate the two forms of abuse – viz. targeted and non-targeted abuse – in my mind is simply because I see no other way to differentiate 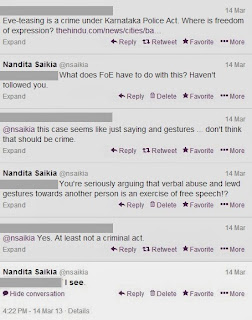 claims that targeted abuse (such as verbal street harassment) is a form of free speech from the principle, easier (if not essential) to accept, that free speech includes the right to say what is unacceptable even if that involves proclaiming the truly nonsensical from every street corner (provided, arguably, that one’s proclamations are legal).

When it comes to free speech, I am entirely unconvinced that there is a coherent or convincing argument to be made to the effect that being abusive constitutes an exercise of the right to free speech – if there is such an argument in existence, it isn’t one I’ve come across. However, although it makes me uncomfortable, I do think that there is a free speech right to make sexist or misogynist statements although I don’t believe that right extends to making such statements without being challenged ...by others who are lucky enough to have a voice.

Having a voice is not the norm; ‘voice is a mark of privilege’, and the lack of voice not only adversely affects one’s credibility as Rebecca Solnit has pointed out but, it could reasonably be argued, also exposes one to greater abuse and discrimination. Which has led me to become increasingly convinced – even if it isn’t accepted wisdom – that VAW and free speech are inextricably linked issues with its being possible for the former to be subsumed within the latter. I’ve spoken along these lines earlier; ‘the essence of abuse, as I understand it, is to diminish the voice of another, and although the employment of different types of abuse or VAW can (and do) produce drastically different sets of consequences, the bottom line is that various forms of abuse all achieve the same end: diminishing the voice of the person(s) abused.’

Seen from this point of view, I’m not certain how VAW could, in essence, be anything other than a free speech issue.

VAW and the 'Call Cops' Theory

(Unproofed, unedited)
Incidentally, the use of the word 'victim' is deliberate.

The episode — let's call it that — began with assault and ended with an inability to access immediate healthcare, not because of the unavailability of healthcare but because a hospital didn’t want to provide healthcare without having the police involved. (And their desire for police involvement, incidentally, had nothing to do with the victim's interests or the desire to address crime against women in general; it had everything to do with ensuring they weren’t left ‘without a leg to stand on’ if the victim died.)

And that’s what is so problematic about enthusiasm to involve the police in instances of abuse regardless of the victim’s consent. The theory of VAW being an offence against the state and that the state must necessarily must take action has the potential to have horrifying real world consequences for victims, not least because state support for victims is non-existent for all practical purposes. Not to mention that the theory, in the wrong hands, could unarguably become a tool of abuse itself it did in the case of the hospital's willingness to provide treatment becoming linked to the victim's willingness to involve the police.

Even where the practical application of the theory is not overtly abusive, and it is employed with the best of intentions, it is still usually abusive in itself. The essence of abuse, after all, is to diminish the voice of another, and, although the employment of different types of abuse can produce drastically different sets of consequences, the bottom line is that emotional manipulation, rape, assault, or (as in this case) simply ignoring what the other person has to say all achieve the same end: diminishing that other person’s voice.

There are times where it is essential (or acceptable) to ignore another person’s voice. Possibly, when they refuse healthcare (although it’s worth noting that DNR requests are generally honoured). Facetiously, when keeping a five-year-old from having a litre of ice cream; questions of respecting an individual’s agency are particularly difficult to contend with when it comes to abuse. Too much respect for it could easily become the facilitation of the original abuse (especially where the abuse is ongoing), too little could become the appropriation of another person’s agency, a form of abuse in itself.

And, no. Regardless of state responsibility to address crime, there is no basis for saying or assuming or implying that the state has the right to possibly endanger persons who have been abused by taking unilateral action on their behalf, especially where it fails to provide support and safety for those victims of abuse whom it may co-opt into its plans to fight crime. Taking unilateral action where that action has the possibility of negative consequences for a victim whether it be the loss of a home or societal ostracism or something else along those lines is unacceptable, and these are often potential negative consequences which women have to deal with.

In addition to which, the legal process is quite simply painful to navigate. That it may be possible to (successfully) conduct a case without the participation of a victim is a possibility that is largely theoretical if the victim is alive. And if alive, there is almost no possibility, if in fact there is any at all, that a case will not impact the victim’s life — should it fail, there is a good chance that she will be branded a liar in the public eye, which of course will have its own set of consequences. And whether or not it fails, the likelihood of the process causing some form of retraumatisation is reasonably high.

And, bearing in mind that none of us make any choice in a vacuum, while it is entirely possible that a victim’s choice may be influenced by persons pressurising her not to involve the police, it would seem indefensible to make oneself into an additional source of abuse by pressurising the victim to involve the police. If there are persons pressuring a victim to do anything, and one is aware of them, it would seem that the most sensible thing to do would be to act against those persons as opposed to acting against the victim.

If the state has a responsibility to initiate legal action against perpetrators of abuse in all cases, it also has a duty (along with society) to protect victims of abuse. Both society and state have failed in that duty — particularly society, to my mind, with its often seemingly endless vilification of women who have been abused, and its deep-rooted misogyny and patriarchy of which the ‘protection’ of (some) women (deemed good) is only an extension. (When was the last time you heard a clarion call to file cases on behalf of abused women who act in socially unacceptable ways; teenagers who are raped on dates, prostitutes who are raped by supposed clients, just for example?)

The discourse of ‘protection’ is quite different from a discourse of ‘rights’. ‘Protection’ is liable to subvert women’s agency and autonomy; it invariably assumes perpetrators of abuse from whom women must be protected and requires someone stronger than such perpetrators (i.e. the state) to act in the best interests of women, assuming a conservative paternal role itself and often circumscribing the freedom of women in the process. Unlike a rights discourse, it does not focus on women’s right not to be abused in the first place, and neither does it necessarily support women in their choice of how to deal with abuse should it occur.

And, unsurprisingly, the possibility of having no option but to involve the police can lead women not to report abuse at all to anyone, including friends and doctors, possibly depriving them of both psychological and medical support. Legal redress, in such circumstances, of course, becomes irrelevant.

If the aim is to fight violence against women as a whole (as opposed to controlling abused women), it would appear to make more sense to beef up state mechanisms both to address abuse and to support those who have been abused than to force victims to involve the cops. It appears inconceivable that there exist vast numbers of abused women who actively would not want their abusers to be made accountable if the abusers could be held accountable without negative consequences for the women themselves. And there appear to be no grounds whatsoever to believe that if systems were better, more victims would not choose to use legal means to counter abuse they have faced.