The Area Around Humayun's Tomb 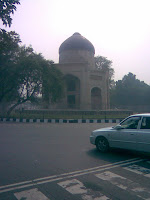 One of the first things which one notices about Delhi is that it’s full of monuments (or what could be monuments) but that hardly anyone knows what they are. This roundabout is on the way to Humayun’s Tomb, one of Delhi’s three much touted heritage sites: the others being Ferozshah Kotla and the Qutb Minar. Nonetheless, despite being just some 500 m away, all most people know is that it’s called Subz Burz and that it lies on the Grand Trunk Road.

The area where the tomb stands is full of old structures. I was told when I first asked for directions that it’s in a very Muslim area of town – not information I had asked for and, as it turned out, information which was irrelevant.

There are several tombs in the compound where Humayun’s Tomb is situated. When one first enters it, one sees the entrance to Isa Khan’s Tomb Enclosure to the right and Bu Halima’s straight ahead. 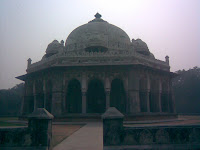 Isa Khan’s Tomb dates back to 1547 AD and includes both a mosque and a tomb. The man himself, according to a notice outside the structure, was a nobleman in the court of Sher Shah Sur and both the tomb and the mosque were built during his lifetime. Amazingly, apparently an entire village lived within the enclosure till the early 20th century. It’s a little difficult to imagine how a whole village could have fit into such a space – even if one doesn’t walk too fast it’d be unlikely to take more than three or four minutes to walk from one end to the other.

Even though the tomb pre-dates that of Humayun by only twenty years, the two are hardly comparable. Isa Khan’s tomb is very beautiful -- and if one has the stomach for it, one can climb up both the tomb itself as well as the mosque -- but in terms of sheer grandeur, it does not even begin to compare to Humayun’s.

This is another tomb of which precious little is known. It's the first thing one sees when one enters the compound: a gateway to Bu Halima’s tomb. It’s a large whitish structure and inside, the gateway feels a little like a doll’s house. No one really knows who Bu Halima was; all that is known is that the tomb belongs to the 16th century and, according to the information provided by the ASI, its western wall was breached in the 19th century to allow access to visitors. 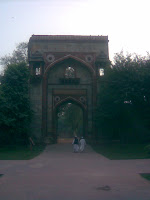 Once one goes through the Gateway to Bu Halima’s tomb enclosure, one sees two more gates: one is one of the Western Gate to Humayun's Tomb and the other is the Arab Serai Gate which is pretty breathtaking in itself. It is some fourteen metres high and once led to a walled enclosure where the Persian craftsmen who were involved in building Humayun’s tomb lived. It’s is built of red sandstone, Delhi quartzite stone and is inlaid with marble. There are also remnants of glazed ceramic tiles visible on it. 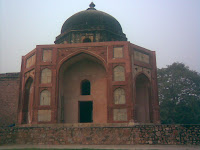 The Afsarwala Tomb and Mosque can be reached through the Arab Serai or through another entrance: once one steps through the Arab Serai Gate, one winds up in an empty courtyard with the back of the tomb and mosque to one’s left. They are believed to have been built in 1566 AD but no one knows whose tomb it is – all that the name denotes is that it belongs to a man who was an officer. The mosque is still in use and once, when I went there, prayers had just finished, and the prayer mats were being loaded on to a cycle to be taken somewhere.

The Western Gate is now the main entrance to the Tomb of Humayun. It is some sixteen metres high and has rooms on either side. It is adorned with six-sided stars which the Mughals used as ornamental cosmic symbols. Inside the gate, there is a small bookshop with sells postcards and books about Delhi’s monuments. 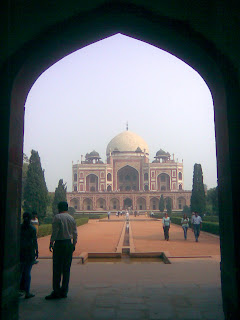 Once one goes through the Western Gate, one is confronted with Humayun’s Tomb which is truly breathtaking. There is absolutely no dearth of tourists and there are also groups of schoolchildren. Personally, I’ve found that most school trips involve dragging children along to see monuments (and museums) they are not especially interested in which means that they don’t spend their time looking at anything. Instead they spend their time dashing around shouting at the top of their voices which is not generally conducive to allowing anyone else to be able to enjoy or appreciate whatever they’re looking at.


The tomb itself is large though – it apparently contains the bodies of some one hundred and twenty Mughals and is surrounded by a large garden. It is believed to have been built by Humayun’s wife after his death (in Purana Qila). And the style of the tomb inspired the designs of many later tombs including the Taj Mahal.


Most tourists don’t really explore the gardens which means that it is entirely possible to find a spot in the gardens where one is alone. Even within the structure of the tomb, there are places where one can simply walk around quietly absorbing the atmosphere of the place. 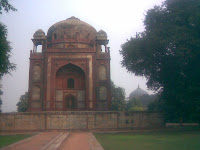 There is another tomb behind that of Humayun’s which is said to be that of Barber. It’s made of red sandstone and contains two ornamental cenotaphs of one woman and one man. It isn’t certain whose tomb it is though. The structure itself is far less impressive than Humayun’s tomb but since very few visitors actually make their way to it, it is very peaceful.

Just outside the compund is a small structure with a beautiful blue dome. It can be seen from inside the compund and, unfortunately, there really isn't too much to it beyond what can be seen from such a distance. It can be reached by going around the compund, but if one were to do that, one would discover that it's rather decrepit; it's a disappointment. Personally, I was much happier before I figured out how to get to it: it was earlier nothing but a mysterious, beautiful blue dome. 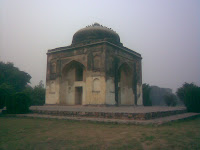 There's a nursery opposite the Tomb compound in which there's a structure which is certainly very old but of indeterminate nature. There's a board which says that it's a protected structure but unfortunately, when the Archaeological Survey of India puts up such boards, it usually doesn't say why the structure is protected or what in earth it actually is.Although the structure doesn't now look especially imposing, it interests me bacause the inside of the dome seems have had a lot of work put into it -- far more than what one would expect in an entirely functional building.