The Last Flicker in the Lamp of Mughal Architecture

Safdarjung's Tomb is a strange place. It's not an important monument, so it's not very crowded.

The average person on the road where it stands has no idea what on Earth it is, let alone where it is. They'll give you directions to the locality Safdarjung, to Safdarjung Enclave, and, if you ask, to Lodhi road. But God help you if you ask for the Tomb: all you'll probably get is a blank stare. You'll be asked what it is, and be informed by the helpful that the road you're standing on is not Aurobindo Road but Arvind Road. And that's despite the fact the the Tomb's entrance is bang on the main road, at the T-junction of Lodhi Road and Aurobindo Road.

Inside, the lawns aren't particularly well maintained; there are over 300 sq m of them. Nor is anything else as well maintained as it is in other more well known monuments. The good thing though is that there are few people around because it isn't, well, iconic.


The Tomb is that of Mirza Muqim Abu'l Mansur Khan who was the Viceroy of Oudh under Muhammad Shah and was later his Prime Minister. It was built by his son Shuja ud Daula in 1753, and marble to build a part of Safdarjung's tomb was taken from the nearby tomb of Abdul Rahim Khan-i-Khana, one of Akbar's nine gems, which had been built around 1598.

Safdarjung's tomb is widely described as 'the last flicker in the lamp of Mughal architecture at Delhi'. It may well be that. While it certainly doesn't have the grandeur of Humayun's Tomb, (or many other structures), it is impressive in its own right. In fact, it has the garden-tomb layout which Humayun's Tomb inspired.

Walking around it, it's all too easy to develop a sense of having history come crashing down on one. And then again, when one walks into it, one can almost feel as though one is invading someone's privacy.

There are areas inside the complex which have been locked. Others which are inaccessible to visitors. But for the most part, visitors can look around with little interference. Sometimes, as good as that sounds, it is hardly ideal. There are no safety warnings and there are places where you could quite easily break a leg if you were to fail to watch your step.

It's hard to see flowers on the ceilings at Safdarjung's tomb with the naked eye, but someone there pointed them out. pic.twitter.com/xLsZZRo59s
— Nandita Saikia (@nsaikia) October 15, 2013

Safdarjung's tomb was renovated a few years ago. Given that the result is quite patchy, I can't say 'restored'. pic.twitter.com/2dppiE6nUg
— Nandita Saikia (@nsaikia) October 15, 2013 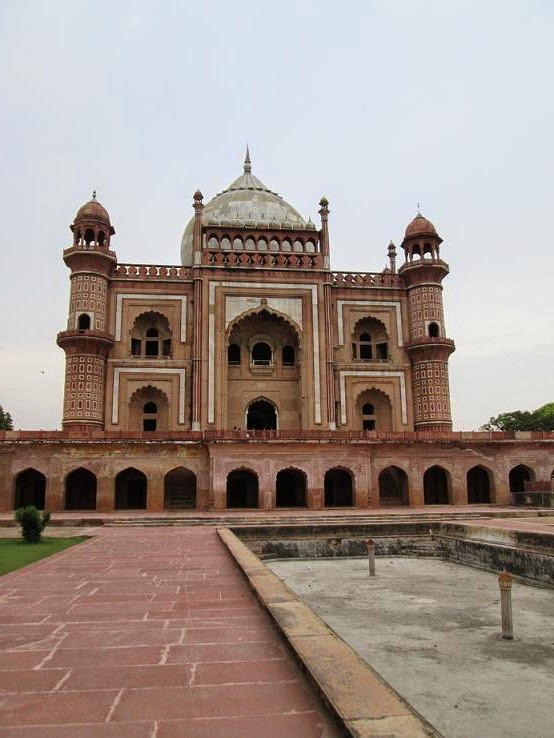 My last trip there was with friends. Standing on the parapet (is that what it's called?), we wound up looking down at more couples than one might expect at Lodhi Garden, a sight I sadly can't 'unsee', and encountered two mothers with three toddlers all of whom made their way around with dizzying speed in three different directions, of course.

One of my friends said that she was very happy to see that the toddlers had been brought to the tomb instead of being taken to a mall. I didn't get beyond having my heart in my mouth and silently thanking God for not having to deal with toddlers myself.

Perhaps young children are best left playing in the garden below, the couples there notwithstanding. Certainly less dangerous than running the risk of falling twenty feet down from a tomb over two hundred and fifty years old, I'd imagine.

n.b. Despite what some history books claim, I've learnt (from a talk by William Dalrymple at the National Museum) that 'the last flicker in the lamp of Mughal architecture' is, more accurately, the tomb of Nadir Shah in Iran! This is, presumably, courtesy his having taken artisans back with him after having raided Delhi.