A Guard at Kotla Ferozshah 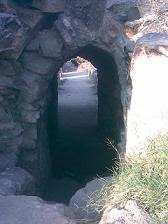 The last time I went down to Kotla Ferozshah which is supposed to be one of Delhi’s it monuments, I bumped into a security guard while I was trying to figure out what was beyond what appeared to be some form of stairs leading down into another area.

I’ve found that some of the people at monuments can be tremendously helpful and knowledgeable about them. This chap, however, seemed a bit odd. He didn’t start raving about the ruins as most enthusiastic persons – usually old men – who work in such places tend to do. Instead, he asked whether I was Indian. My initial thought was that he might have been wondering whether or not I’d paid the rate foreigners are supposed to pay for a ticket so I said yes. Then, he asked where I was from. Not wanting to be rude, I just smiled while he tried out everything from Jharkhand to Kerela. Seriously.