Euripides' Medea has defined the modern perception of her. Some time ago, the Teatro Instabile Di Aosta presented, in Delhi, a contemporary revisiting of Euripides' Medea in a play based on the texts of Euripides and Pasolini revolving around “discriminations and forbearance, power and revenge, and the meeting of two extremely different worlds; the one that is logical and rational, and the other one that grapples with the possible reality of mythology and ritual,” as the brochure said. The performance was meant to portray the universality and power floating in the story culminating in the “terrible decision that Medea comes to as a result of her painful suffering.” 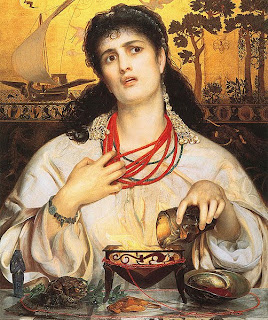 Her “painful suffering” was the suffering which her husband Jason inflicted on her by being unfaithful to her and marrying Glauce, a princess, to further his political ambitions. He justified himself by saying that he could not pass up the opportunity to wed a princess, and Medea was, after all, a barbarian woman, never mind that she was a barbarian woman who'd given up family, home, and homeland for him. He ultimately, apparently, planned to "unite" the two families -- his family with Medea, and with Glauce -- and turn Medea into his mistress.

Medea's "terrible decision" was the plan she decided to execute to revenge herself on Jason -- she killed Glauce (and, Glauce's father, Creon) using a poisoned dress, and killed the two children she had had with Jason in order to spite Jason and cause him as much pain as possible, or so one interpretation runs. Whether or not she should have been held accountable is debatable though.

Jason had supposedly remarried so that he could have children with Glauce. And when Glauce and his father-in-law were murdered by Medea, he apparently rushed to find the children he had had with Medea so that they would not be subjected to revenge because of their mother's act. It could well be argued that one of Medea's aims in killing her children was to spare them death at the hands of her enemies.

Then again, by killing the children, she effectively killed a part of Jason. And perhaps that was the ultimate revenge: Jason wanted children, and she not only deprived him of the possibility of having children with Glauce but also killed the children he had already had with her. To kill the children for a reason that was anything but altruistic would involve viewing the children not so much as individuals in themselves but as extensions of their father, which perhaps could be understood given that contemporary Greek society was intensely patriarchal, and viewed women mainly as breeders and chattel.

Contemporary Athenian law also allowed a man to marry and have children by a citizen woman while keeping a foreign woman who was not a citizen, in this case, Medea, as a concubine. And as far as divorce was concerned, all a man had to do was formally repudiate his wife, and send her back to her father or other male guardian with her dowry. There were two reasons who this did not apply to Jason and Medea though: firstly, Medea had contracted her own marriage, and as such, she had no one she could be "returned to". Secondly, Jason had sworn to be wed to Medea before Zeus and Hera, and as such, by divorcing her, he had in fact, broken an oath to the Gods.

Whether on not Medea is, or should be, criminally culpable is an open question though lying on thoroughly ambiguous moral ground. Medea was obviously distraught at the time she developed her plan for revenge. The murders were premeditated to the extent that she did not commit them on the spur of the moment. However, she developed the plan at a time when she was quite obviously not emotionally stable. And the duration of the time from when she first conceived of the plan to the time when she executed it was short.

In addition to this, there is the question of provocation. In law, if a person commits a crime in consequence of being provoked, their criminal liability could be diminished to the point of being non-existent. It isn't clear whether Jason's conduct would be viewed as "adequate provocation" to cause Medea to commit multiple murders -- presumably, it was not unheard of conduct at the time the play was written -- although it would be difficult to argue that Medea's committing the murders had nothing to do with her being cast off, and banished. She lived in a society in which she seems to have had no recourse to any form of justice, as a "barbarian" woman she was especially disadvantaged, and being exiled would have left her in an entirely hopeless position.

Medea states in the play that she knows her own mind, and that she knows that what she is doing is wrong. However, given that the act which seems to have spurred her to commit the murders is her banishment with immediate effect by Creon, Glauce's father, it is unlikely that she did actually know her own mind.

She managed (by being manipulative) to get a twenty-four hour grace period from Creon, during which time she both planned and executed the murders. Jason arrived to meet her after Creon left her, and insulted her. It was in these twenty-four hours that she planned and committed the murders. In the play, she is simply not decisive with regard to murdering her children until the last possible moment.

Medea unequivocally states in the play that she is an autonomous individual -- an assertion which in itself would have been questionable especially given that women were subject to the rule of men in a very literal sense with little autonomy of their own. Perhaps in the way that Glauce seems to have been little beyond a pawn in the schemes of her father and Jason, and who died because of those schemes.

Medea, however, managed to thoroughly subvert Jason's schemes, and escape the consequences of her actions. At the end of the play, she is shown escaping in a chariot provided by the Gods -- leaving no doubt of whom they supported. She speaks in a voice which is reminiscent of that used by the Gods, cold and distant. Driven to murder by Jason, she is ultimately far removed from emotion itself, it would seem.

Image: Medea by Sandys from WikiCommons

The Tomb at Tughlaqabad 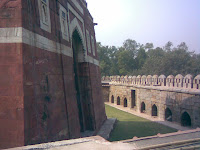 The glories of our blood and state
Are shadows, not substantial things;
There is no armour against fate;
Death lays his icy hand on kings.
Sceptre and crown
Must tumble down,
And in the dust be equal made
With the poor crooked scythe and spade.
— James Shirley
I had visited Tughlaqabad fort which was built by Ghiyas-ud-din Tuglaq in the 14th century. An elevated causeway on the southern side of the fort connects the fort to the mausoleum of Ghiyas-ud-din Tughluq which was built by the ruler himself.
The fort itself comprises what were undoubtedly once imposing stone fortifications, now in ruins. The causeway has been cut across to make space for a highway. And the lake over which it apparently once ran has long since dried out, giving way to a rather dusty ground which children play on.The mausoleum is relatively simple; it’s architecture Indo-Islamic. Inside, there are two graves which unnerved me a little bit: one is in the centre and the other to its side. While I know little about mausoleums, stepping in, considering the symmetry which Islamic art and architecture are virtually defined by, it somehow seemed to me that another grave had been planned to have been place in it. Whose, I don’t know.
A private courtyard with fortified walls encloses the mausoleum. Some of its corridors are filled with rubbish.Ghiyas-ud-din Tughluq was one of the most powerful men of his time. His son and successor, Muhammad bin Tughlaq is also believed to have been laid to rest in the mausoleum. They were in all probability virtually unapproachable in life. In death, it costs five rupees to do so.

Reading about marriage and contracts, whether they be marriage as contracts or otherwise, I came across an interesting analysis of the social contract: that it was preceded by rape, and that it finds its genesis in the Sexual Contract which Carole Pateman expounded.

The Social Contract, which Locke, Hobbes and Rousseau dealt with, speaks of political obligation, obedience and legitimacy, and is, remarkably, by and large, silent about women. True, Locke talked about the "person" but a close reading of his work reveals that his individual person was in fact, the individual man. He spoke of wives being subject to their husbands although he had nothing but the Bible and contemporary social norms to support his assertion. In marriage, women were assumed to exchange obedience for protection, they therefore could not have truly entered into a contact with free will and autonomy given that they effectively lost that autonomy when they married. His Social Contract also contained a separate sphere in which women effectively remained --- the private sphere.

And it is also through the performance of the Sexual Contract that the Natural Right which men enjoyed over women in the State of Nature is transformed into a legitimate, patriarchal, civil right. While the exact story of the Social Contract differs depending on who narrates it, what is common to all 17th and 18th century versions of the contract is that it is a contact entered into by men of their own free will to establish a legitimate structure, and to negate the chaos and anarchy prevalent in the State of Nature. The story of the contract is invariably presented as a story in which free will, rational thought, and individualism prevail, a story in which men give up some of the rights they "enjoyed" in the State of Nature in exchange for social structure and, so to speak, the greater good.

The patriarchy established by the Social Contract comprises a number of different facets including the paternal right and the political right. (Some theorists claimed that the paternal and political right were the same, others claimed that they were different.) In any case, women's rights are not mentioned in the Social Contract, although women must participate in the social regime for the patriarchal right to arise at all. The paternal right cannot arise without a woman becoming a mother, and for this to happen, there must be an incidental and accessory unmentioned right which men enjoy: the Sex Right --- a right incorporated in the Sexual Contract which grants men dominion over women and their bodies.

17th and 18th-century theorists, having no desire to question the paternal right, simply incorporated the Sex Right into the political right. The Sex Right was a right which presumably existed in the state of nature. All that the Social Contract did was to assume the existence of a Sexual Contract, and incorporate it into its own body, thereby providing a legal and orderly manner in which men could exercise a right which they enjoyed in the State of Nature.

As far as the political right is concerned, it is a right which, under the Social Contract, men enjoyed and women did not although women's exclusion from the enjoyment of this right was not explicitly stated -- the philosophers spoke of the "nature of women", their "role in the family" and confined women to the "private sphere", a sphere in which they had already exchanged obedience for protection, and thus a sphere in which they had no autonomy in any case. The political right was a right which manifest itself in the public sphere, a sphere to which women did not, until recently, have any access at all.